Shovelmouths were large elephantine mammals that lived during the ice ages.

Shovelmouths had small ears, thickly-built bodies, and three-toed feet. Their most notable trait, though, was their long, flat mouth, topped with two flat, wide front bottom teeth. Shovelmouths moved in herds and moved slowly most of the time.

The shovelmouths were among the animals to migrate south, and were found most abundantly in the Ice Valley, where a number of them enjoyed the waterpark, but left it quickly upon hearing that the valley was to flood over, caused by the tons of ice and snow that were melting.

The shovelmouths left the Ice Valley alive and found new homes elsewhere, notably in the Snow Valley, where a number of them met a furious mother Tyrannosaurus Rex, a species thought of as extinct, that was searching for her missing children.

Later on, the shovelmouths were among other creatures that lived through the days of the continental drift and left the land they lived quickly, along with other creatures, once the land began to be split by the continental drift. The shovelmouths present during the migration away from the drift had found a new home, reaching it by a travel aboard a massive iceberg to a far-off landmass.

Few years later, some shovelmouths witnessed a meteor shower, and, not long after that, they have been invited to the wedding of Peaches and Julian, two mammoths that there were members of the herd that stopped a deadly asteroid.

The scientific name of the shovelmouth is Platybelodon. The common name, invented by who worked on the movie, has been revealed in the end credits of the second movie and, obviously, comes from its appearence.

The shovelmouth was slated to appear in the first movie, but was scrapped for unknown reasons, however they did appear as cave paintings

As with many of the other animals in the films, the shovelmouths were not true animals of the ice ages, but rather the era prior to them.

Shovelmouths in Ice Age The Meldown appeared either grey or dark grey. The ones that appeared in the later films were more bluish, pinkish. 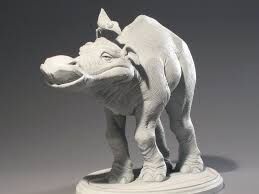 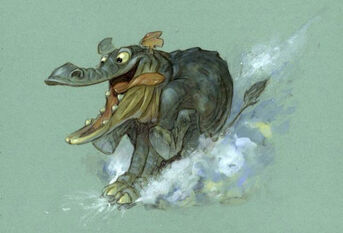 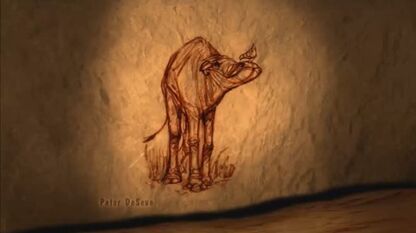 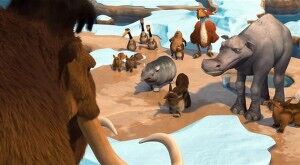 Add a photo to this gallery
Retrieved from "https://iceage.fandom.com/wiki/Shovelmouth_(species)?oldid=78413"
Community content is available under CC-BY-SA unless otherwise noted.