"…you rhinos, you have really tiny brains."
―Sid conversing with Carl and Frank.[src]

Rhinos were large mammals that lived during the ice ages.

Thickly-skinned with tough, leathery hides, rhinos had small ears and eyes, short necks, thick bodies, short tails and short, stout legs with flat, three-toed feet. Above all, however, the rhinos had large, two-pointed horns, with some individuals sporting a thin, two-pointed horn and others one large, flat horn with two dull ends. Rhinos usually moved in herds and, when prompted to, were able to run quickly, charging down their path.

Rhinos, like many other animals of the ice ages, were among those that migrated with the other herds of animals south for the winters, leaving behind the frozen forests and plains that they had inhabited before.

Few, if any rhinos, resided in the Ice Valley, though one young male was among the younglings that resided in the valley, making use of the naturally-formed ice waterpark. This young male had been among those mammals that had encountered a Tyrannosaurus, a species of animal long since thought extinct. In time, the rhinos were among those animals that existed during the days of the continental drift and made the move out of the land they once lived in, as it was being threatened by the drifting landmasses, making it to a new island home by way of an ocean bound iceberg that they boarded

Considering the shape of nasal horns. Rhinos shown in the movies seems to belong to the two different species called Megacerops[1] (previously known as Brontotherium and/or Traenetorbudum, respectively thin-horned Frank) and Embolotherium[2] (respectively thicker-horned Carl). Two species that were closely related to each other and were part of a group of mammals called brontotheres.

Though referred to as "rhinos" in the Ice Age series, they were more related to horses rather than rhinos, in fact the trademark horn of brontotheres, unlike those of rhinos, was made of solid bone, and was more likely to have been used for display than combat.

True brontotheres were almost the size of an African elephant, sporting four toes on their front feet and three in the back. The brontotheres shown in the series are more the size of modern rhinos and have three toes on all four feet.

Both Megacerops and Embolotherium, among a large part of the animal species featured in the movies, aren't true creatures of the ice age, living about 30-40 millions years ago, during the period Eocene. Plus, the second one lived in Asia, not in North America. 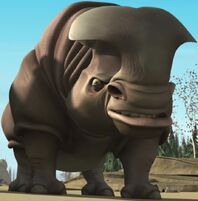 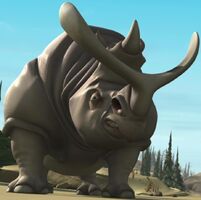 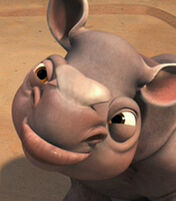 Rhino calf shown in the Ice Age: The Meltdown
Add a photo to this gallery

Retrieved from "https://iceage.fandom.com/wiki/Rhino?oldid=78135"
Community content is available under CC-BY-SA unless otherwise noted.