"You are a very advanced race. Together, we can look for a solution!"
―Sid to Layla Zee (leader of the Mini Sloths).[src]

Mini-sloths were small mammals that lived during the ice ages.

Appearing as tiny versions of ground sloths, mini-sloths sported the same features as their larger relatives: elongated necks, ovular heads with eyes on either side, stout nose, long forearms with clawed paws, short legs with clawed feet and short, scrubby tails. Mini-sloths were about a third the size of ground sloths and tended to appear in brighter colors than their larger relatives, ranging from blue and red to yellow and green.

Unlike the larger ground sloths, mini-sloths were much more advanced, residing in large congregations rather than living individually as larger sloths did. Mini-sloths possessed an advanced knowledge of science, knowing that the ice in their habitat was melting due to subterranean activity, though they followed such superstitions as the idea of “bad juju”, or divine misfortune, affecting them, along with ritual sacrifice, and believed that by offering a sacrifice to the Earth the melting ice would cease. The mini-sloths revered fire and declared any that produced fire for them their "Fire King".

A tribe of mini-sloths, led by one female named Layla Zee, lived in the Ice Valley during the days of the melting ice, where they resided in a rocky cropping near a forest. Knowing that their lives were in danger due to the floods brought on by the molten superheated rock from the planet core melting the built-up ice of the ages, the mini-sloths sought out a means of abating the flood: they would find their Fire King, who could produce fire for them, and sacrifice him to the very molten rock that was bringing on the flood. To commemorate their Fire King, the mini-sloths built a massive rock effigy of a ground sloth's likeness.

The tribe of mini-sloths spied on a ground sloth named Sid, who was trying to produce fire by rubbing rocks together: once asleep, Sid was abducted by the mini-sloths, who took him back to their camp, where Layla Zee herself presented Sid with rocks. Sid, understanding that they wanted fire, produced it for them, and with that, the mini-sloths, in their ritual, began to imitate Sid's movements, engaging him in an elaborate dance, which ended in the mini-sloths binding Sid in vines so as to sacrifice him.

Layla Zee explained to Sid what she planned to do in sacrificing him before the larger sloth was cast into a nearby molten pit. The mini-sloths, thinking their ritual successful, were unaware that Sid was launched back up from the pit when the vine that he was tied with tangled itself on a rock and shot him back up, where Sid landed in the rock statue's nose. The impact of Sid in the rock caused the statue to jar itself loose and tumble down, scattering the mini-sloths, who deemed the rock falling "bad juju".

Sid told his herd of this experience while they believed it was a dream even telling him to forget it.

After the floods had abated, the mini-sloths, all having survived, found Sid once more and he was horrified to see them. They pleaded that he join them as a figure of honor, since they thought he averted it. Diego saw this and was shocked Sid told the truth and helps Sid in turning down the position, as his herd needed him more. The rest of herd were shocked to see the sloths and confirm Sid's story.

Shortly after, the mini-sloths found the dead bodies of two ancient sea reptiles, Cretaceous and Maelstrom, and carried them off, deeming them "good sushi".[1]

A number of mini-sloths found residence at the North Pole, where they kept watch over the magical human known as Santa Claus, ensuring that he remained undisturbed as he worked on his toys. The mini-sloths encountered Sid, who arrived with part of his herd: two possums named Crash and Eddie and their adopted mammoth niece, Peaches, all led by a magical reindeer named Prancer. The mini-sloths attempted to attack the intruders, but in so doing caused an avalanche that destroyed Santa's workshop and all his toys. The rest of Sid's herd, two mammoths named Manny and Ellie, and a Saber-Tooth Tiger named Diego, found the North Pole, only to find it decimated by the avalanche. In anger, Santa put all the mini-sloths, Manny's herd and Prancer on his Naughty List for destroying his work, condemning them all for Christmas.

The mini-sloths were mentioned in both Ice Age: The Great Escape" and the film's essential guide as having found the remains of Cretaceous and Maelstrom and taking them away so as to eat them.

Though mini-sloths are not cited as a distinctive species, they resemble various species of ground sloth from the West Indies that were approximately the size of large cats. 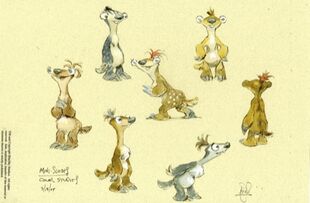 Concept art of mini-sloths
Add a photo to this gallery

Retrieved from "https://iceage.fandom.com/wiki/Mini-sloth?oldid=77140"
Community content is available under CC-BY-SA unless otherwise noted.