Maelstrom was a pliosaur[1] that hunted animals during the ice age. He and his companion Cretaceous are the main antagonists of Ice Age: The Meltdown.

Maelstrom and fellow sea reptile Cretaceous were once creatures of the era of dinosaurs that had worked in tandem to catch prey. After having been frozen in the waters they swam in, both reptiles remained in stasis until the ice ages began, thawing them out into a world ruled by mammals instead of reptiles.

Frozen long ago with Cretaceous during the era of the dinosaurs, Maelstrom was imprisoned in a great block of ice that was jarred loose when the wall of ice that it had been part of began crumbling, due to global warming loosening it.

The ice melted, releasing both Cretaceous and Maelstrom into the lake which was all but abandoned by most animals. When they made it to the ice lake, the first animal that they had encountered and eaten was Stu the glyptodon, leaving behind only his shell. The two sea reptiles then swam further down the series of rivers where they eventually reached Manfred's herd as well as Crash, Eddie, and Ellie.

Maelstrom intended to eat Sid but could not catch him, as Sid was already escaping with Diego, and had only just escaped Maelstrom as he broke off a massive chunk of ice where the sloth and Saber-tooth Tiger had stood only moments before.

Later when the dam broke, the two reptiles went swimming on the wall of water that was slowly approaching the escaping masses and pulled down Manny when he was swimming to save Ellie. Manny devised a plan to rid himself of the two sea reptiles, by having them try to chase him, he tricked them into hitting a log that was wedged under a large rock. The plan worked, freeing Ellie, and knocking the two reptiles down with the boulder.

Maelstrom had a personality similar to Cretaceous, they were both vicious, hostile, hot-tempered, impatient and ravenous. Cretaceous and Maelstrom were shown to be aggressive and relentless when pursuing their prey, and they got angry easily if it escaped from them. Maelstrom was also shown to be an opportunistic predator, as he targeted Sid and Diego when they were separated from the others of the herd.

Like his smaller companion Cretaceous, was incapable of speech and so communicated in loud growls, bellows, or roars. Maelstrom was a large pliosaur, thickly built with a large mouth filled with sharp teeth ideal for breaking bone, faintly glowing yellow eyes and armour-like teal scales that were topped off with spikes and bumps, propelled through the icy waters with large, flat fins. Within Maelstrom's digestive tract were several parasites: a number of stunted giant single-celled organisms and a large parasite with multiple eyes and a beak.

Maelstrom's species, in the online game Ice Age Village, are erroneously referred to as 'Maelstrom'. 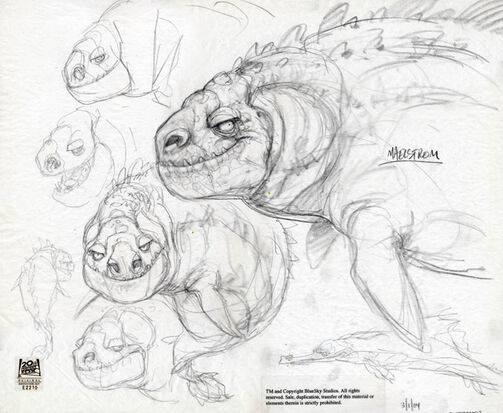 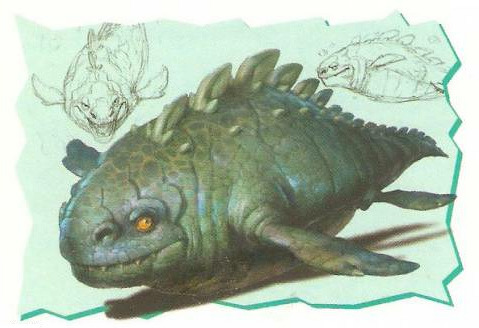 has a collection of images and media related to Maelstrom/Gallery.

Retrieved from "https://iceage.fandom.com/wiki/Maelstrom?oldid=81620"
Community content is available under CC-BY-SA unless otherwise noted.