A Kentrosaurus is a small Dinosaur that is mostly known for the row of spikes that runs down it's back and tail. They are herbivores. They are part of the Stegosauria family and lived in the late Jurassic period. They are depicted in Ice Age: Dawn of the Dinosaurs as having abnormally long necks, buggy eyes, and hawk-like hooked beaks. There relative is the Stegosaurus.

These dinosaurs and several other species discovered a group of mammals before attacking they notice the resident weasel, named Buck, who throws berries at them. After the escape, another herd of kentrosaurus feeds on ferns, ignoring the subzero heroes.

Kentrosaurus' were not as fat as the ones portrayed in the movie. They had a lower head and shorter neck. They lived with other herbivores like Giraffatitan and carnivores like Allosaurus. Their Chinese relatives lived with other herbivores like Mamenchisaurus and Shunosaurus, and even deadly carnivores like Guanlongs and Yangchuanosaurus. They are one of the dinosaurs with small brains, like other stegosaurs. In the movie, they can stand and walk on their hind limbs, While real stegosaurs like the Kentrosaurus could stand on their hind limbs but not walk on them. The differences are probably due to the movie's dinosaurs having millions of years to evolve under the ice, making them look different from their real-life counterparts. 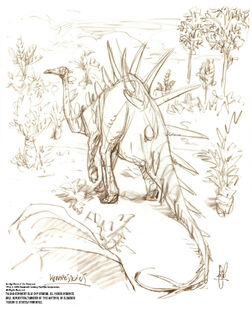 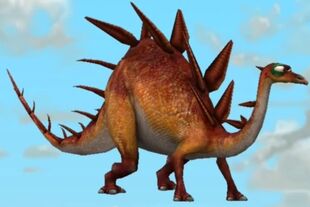 Kentrosaurus in the game. 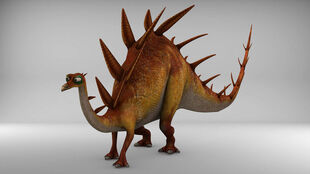 Kentrosaurus modeling used in Ice Age: Dawn of the Dinosaurs video game.
Add a photo to this gallery
Retrieved from "https://iceage.fandom.com/wiki/Kentrosaurus?oldid=76379"
Community content is available under CC-BY-SA unless otherwise noted.