Dodos were medium-sized birds that lived during the ice ages, They appear as minor antagonists in Ice Age.

During the early stages of the ice age, one flock of dodos began preparing for the harsh changes by forming militant regimes, complete with combat training and marches, stockpiling food and instilling their doctrines that they were superior to other creatures of their time, and that all other animals were nothing more than beasts.

This resolve was tested when one dodo named Dab snatched a melon from the trunk of a mammoth named Manny and ran off with it, adding to the stockpile of food that the dodos had gathered. Dab then spotted the mammoth, accompanied by two other mammals with a baby and called out to the others in his flock that intruders had come, not paying mind to where he was going and falling into a smoldering crater, which was the subject of a lesson being taught to other dodos. The mammoth asked of the dodos whether he might have a melon, but was denied by one dodo, who explained that the melons were their stockpile for the ice age, and that oncoming subarctic temperatures would drive them all underground for a "million billion years", then rebuking Manny for not planning ahead, with the other dodos joining in.

One dodo lost his footing on the melon that he was guarding and let it slip towards the baby, with a trio of dodos rushing into action to get it back, but rather throwing it off a cliff by mistake, to which a number of the birds, including the flock's last female, chased it, falling off themselves. A second melon was then thrown into play when one of the mammals, a ground sloth named Sid, reached for it, but the dodos all disarmed him of it, the melon almost falling into the smoldering pit, but stopped momentarily by three dodos, who themselves fell into the pit, with the melon. The final melon was then apprehended by Sid, who dropped it once a flock of dodos swarmed on him towards Manny, who kept it out of the dodos' reach with his trunk, but was disarmed of it as well once one dodo bit his tail, causing him to scream in pain and throw the melon into the air. Sid catches the melon in his paws. The dodos all surrounded the sloth and ultimately lost their last melon once Sid traversed past them. Shortly after, a small number of the dodos stood atop one another, attempting to balance themselves but fell.

Not long after, one dodo, traveling alone, walked through a geyser field and was incinerated alive. Shortly after that, a saber-tooth squirrel named Scrat, undergoing a near-death experience, met more dodos in the afterlife, which acted as a choir in Scrats heavenly vision.

Dodos were fat-bodied, thin-necked birds that had a large beak, small ineffectual wings, and a set of fluffy tail feathers. The dodos had thin legs with clawed feet, and could run somewhat fast if pressured to do so. Despite of their characteristics, they also seem to have a lot of energy to the point they can fight in goofy ways, especially in Kung Fu.

Dodos were flightless birds that gathered together in large flocks, carrying on a somewhat militant tone as they marched in rows and trained themselves during the Ice Ages for the worst. The dodos gathered a stockpile of three melons for the Ice Ages, believing that subarctic temperatures would force them all underground. Dodos also believed that they were superior to other creatures of their time, as their ways of life were correct and that all other animals were nothing more than beasts. The dodos had a lack of basic intelligence and hardly noticed things when marching, not realizing that they were sometimes either stepping on their compatriots or running off cliffs or into lava pits.

Dodos were the last species featured in the Ice Age films to become extinct. 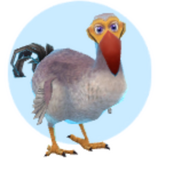 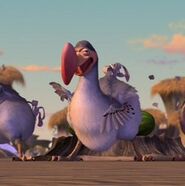 Add a photo to this gallery
Retrieved from "https://iceage.fandom.com/wiki/Dodo?oldid=81100"
Community content is available under CC-BY-SA unless otherwise noted.