Diatrymas were large flightless birds that lived during the ice age.

Diatrymas were large, thickly-built birds that had large heavy yellow beaks, powerful, two-toed legs for running and small, stunted wings that were only used for gesturing. Coated in shaggy red feathers with a white underbelly, diatrymas were dedicated parents that kept their young close by, building nests for their young and, from time to time, moving them in the nests, carrying them, nest and all, as they walked. When in moments of danger, or simply if panicked, diatrymas would force their heads into the ground or run around, gobbling in fear.

Among the herds of animals that escaped the northern lands and the snow brought on by the Ice Ageice ages]] were diatrymas, reaching the Ice Valley in substantial numbers, frequenting the Waterpark as they remained in Ice Valley. The diatrymas, however, were quick to leave the waterpark upon learning that the valley was soon to flood, finding refuge from the floods at the end of the valley, wherein was situated a vast boat made from the remains of a giant fallen tree. The diatrymas, along with all other creatures aboard the boat, survived the flood.

Some time later, in the Snow Valley, a number of young diatrymas encountered three young Tyrannosaurus and attempted to play with them, but soon changed their tune as they saw how rough the young dinosaurs played. With that, their mother, a female named Momma, came to find them, revealing to the diatrymas, and all other animals, that dinosaurs were not truly extinct. Rather than hunting the animals around her, however, the mother dinosaur intended to find her young and take them back to her home.

Years on, diatrymas, along with other creatures, experienced the perils of the continental drift, in which the continents all began to divide. With this, the diatrymas, and all other animals in the area, were ushered off by a mammoth named Ellie, who directed them all towards the coasts. N​ot long after, a ship fashioned from ice appeared, piloted by Ellie's mate Manny and the others in their herd, taking the diatrymas and all other animals to a new home far away from the land divided by the continental splits.

Few years later, some diatrymas witnessed a meteor shower, and, not long after that, they were invited to the wedding of Peaches and Julian, two mammoths that there were members of the Sub-Zero Heroes that stopped a deadly asteroid.

has a collection of images and media related to Diatryma/Gallery. 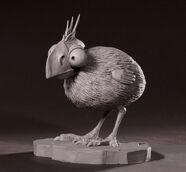 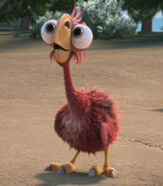 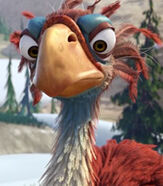 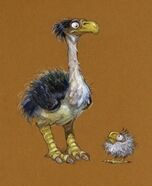 Retrieved from "https://iceage.fandom.com/wiki/Diatryma?oldid=78392"
Community content is available under CC-BY-SA unless otherwise noted.