Cretaceous was an ichthyosaur[1] that hunted animals during the ice age. He and his companion Maelstrom are the main antagonists of Ice Age: The Meltdown.

Cretaceous and fellow sea reptile Maelstrom were once creatures of the era of dinosaurs that had worked in tandem to catch prey. After having been frozen in the waters they swam in, both reptiles remained in stasis until the ice ages began, thawing them out into a world ruled by mammals instead of reptiles.

One million years before the days of the ice age [2], Cretaceous and his friend, another seaborne reptile named Maelstrom, were frozen in ice, stuck within it until the melting stages of the ice age. 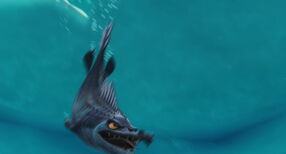 After all that time, however, the great block of ice that contained both reptiles was jarred loose when the wall of ice that it was attached to began crumbling, landing in a vast lake at the end of a valley.

The ice melted, releasing both Maelstrom and Cretaceous into the lake, which was all but abandoned by most animals. Having been in stasis for one million years, both reptiles had developed an intense hunger and were quick to seek out prey in this new world, dominated by mammals, which both reptiles found as more of a challenge to pursue than the reptiles of their era. Upon emerging into the lake, both Cretaceous and Maelstrom encountered their first prey animal: a glyptodon named Stu, who was swimming in the lake until both reptiles caught Stu and devoured him, leaving behind only his shell and swimming off further through the lakes after their next meal.

The two sea reptiles then swam further down the series of rivers where they eventually reached a herd of mammals led by a mammoth named Manny, consisting of a ground sloth named Sid, a Saber-Tooth Tiger named Diego, another mammoth named Ellie and a pair of opossums named Crash and Eddie. Maelstrom made the first move, breaking through the ice as Cretaceous joined in the chase, going after Manny, trapping him on an ice floe and slithering after him. Manny then saw that the ice block they were floating on was tipping because of Manny's weight. Taking advantage of this, Cretaceous made a great pounce at Manny, but was caught on his tusks, and flung far off, hitting a piece of ice and falling back into the water. Knowing they could not catch the mammals on land, the two reptiles leered angrily at them and sunk below the waters.

Later, when the dam broke, the two sea reptiles went swimming on the wall of water that was slowly approaching towards the escaping masses of animals. Both Cretaceous and Maelstrom pulled down Manny when he was swimming to save Ellie. Manny devised a plan to rid himself of the two sea reptiles, by having them try to chase him, he tricked them into hitting a log that was wedged under a large rock. The plan worked, freeing Ellie, and the boulder came down on the two reptiles.

Cretaceous had a personality similar to Maelstrom, they were both vicious, hostile, hot-tempered, impatient and ravenous. Cretaceous and Maelstrom were shown to be aggressive and relentless when pursuing their prey, and they got angry easily if it escaped from them. Cretaceous was also shown to be greedy, as he targeted Manny, who was the largest one in the herd.

Cretaceous, like his larger companion Maelstrom, was incapable of speech and so communicated in loud growls, hisses or roars. Cretaceous was a large ichthyosaur, thickly built with an elongated snout lined with many pointed teeth ideal for slicing into prey, faintly glowing yellow eyes, a spiny sail and tail equipped with a long fishlike fin, and armor-like purple scales that were topped off with small spikes and bumps. Cretaceous propelled through the icy waters with two strong front legs and two small hind fins, the former of which could be used to haul himself onto land or any surface should the need arise.

Cretaceous is revealed to be an ichthyosaur in the Essential Guide, though his appearance is altered for artistic purposes, as actual ichthyosaurs had less pointed dorsal fins, little or no neck, no armor plating, a more streamlined body, proportionate fins and a dolphin-like snout. It's also possible that he and Maelstrom came from the Dinosaur World (despite its existence has been revealed only in the following movie), and during the millions years in which the pliosaurs and the ichthyosaurs lived there, they changed their appearances in the ones of the two specimens seen in the second movie. This would also justify what is written in the Essential Guide, namely that they have been frozen a million years before the ice age, while actually both of their species went extinct about 90 million years ago (even though it's possible some still survived).

The sounds used for Cretaceous and Maelstrom's vocalizations were those of whales, coupled with tigers growling and human voices to give an eerie quality.

Initially, according to director Carlos Saldanha, there were to be three water-based predators, and concept art showed a small, amphibian creature similar to an axolotl.[3] Moreover, Saldanha intended the two reptiles to be surely dangerous enemies, a feat accomplished by having them kill off one character so as to prove their threat: Stu.

The fate of both Cretaceous and Maelstrom remains unclear: while it is overt that they were vanquished by Manny, different sources present different endings, with the storybook of the film showing them being eyed by vultures while the Essential Guide stated that they were ostensibly eaten off by mini-sloths. In Ice Age: The Great Escape, however, it was stated that both reptiles were sucked into the vast ice crack that Scrat had opened up, along with all the waters. Once sucked in, as it was stated in the Essential Guide, their bodies were carried off by the mini-sloths and deemed "good sushi".

Cretaceous' species, in the online game Ice Age Village, are erroneously referred to as a Metriorhynchus or 'Metri', which he resembles more closely of.

has a collection of images and media related to Cretaceous/Gallery.

Retrieved from "https://iceage.fandom.com/wiki/Cretaceous?oldid=81404"
Community content is available under CC-BY-SA unless otherwise noted.